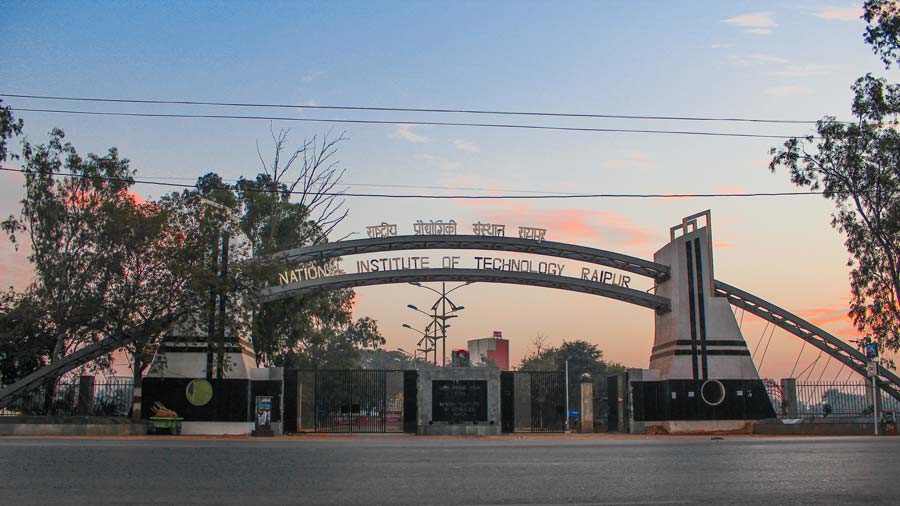 Sequel to achieving an independent stature by India from the British rulers in the year 1947; buoyant humanity aspirations drew the attentions of its visionary leaders for strengthening an educational institutional base as the backbone for the natural resource based growth trajectories. To usher new era the first President honourable Dr. Rajendra Prasad laid the Foundation stone for an engineering college infrastructure in 100 acres of land on the auspicious day of 14th September 1956 at Raipur in the then Madhya Pradesh state of India having rich mineral / natural resources in the vicinity. The construction work was completed in 1962 and inauguration was held on 14th March 1963 by India's first Prime Minister Pt. Jawaharlal Nehru. With modest beginning of 2 streams namely mining & metallurgy admitting 15 students; the first batch of engineers passed out in 1960.The institute possesses a well - organised, magnificent building symbolising the grandeur of the institute. This huge building alone covers a total area of 62060 sq. m. It is a triple storied structure along with a 23 m high central tower. There are 35 lecture halls extending over an area of 6675 sq. m & 13 drawing halls / studios extending over an area of 3510 sq. m., 85 laboratories over an area of 11510 sq. m and workshops. The status of Government Engineering College, Raipur got elevated to National Institute of Technology by the Central Govt. with effect from 1st Dec. 2005 thereby attracting many fundings opportunities and the stature in academic domain.

The institute situated at Raipur; capital of a natural resource rich state Chattisgarh carved out of Madhya Pradesh in the dawn of 21st century; prioritised academic courses in synergy with National growth trajectories for promoting metallurgical, power sector and core sector industries to begin with. The workshops and laboratory facilities were set up with substantial investments in those days giving hands on learning experiences during the academic studies. In the first decade courses on civil, mechanical, electrical and chemical were added. Going further Architecture, Electronics, Information Technology, Computer Science and Technology, Biotechnology, Biomedical Engineering were added during subsequent three decades. The process of enhancing the academics domain has been in pace with the changes in the demands / developmental cycle moving from core industries to energy, entrepreneurship, innovation, soft skills during six decades. Currently it has Applied Geology, Architecture, Bio Medical Engineering, Bio Technology, Chemical Engineering, Civil Engineering, Computer Science & Engineering, Department of Chemistry, Department of Mathematics, Department of Physics, Department of Humanities & Social Sciences, Electrical Engineering, Electronics & Telecom. Engineering, Information Technology, Master In Computer Application, Mechanical Engineering, Mining Engineering, Metallurgy Engineering and Workshops. Each of the department has research facilities for a number of specialised fields. More than 200 Acres of land has been allotted by the Government for an upcoming new infrastructure with state of the art facilities with the vision of next 50 years. The Institute has the Board of Governors, undertakes consulting assignments, admits foreign students as well. It provides an learning experience at par with the international standards. The profile of the Institute is available at website: www.nitrr.ac.in. The institute presently enjoys the credibility of 60 years of academic delivery upbringing over 300000 engineers since the first batch of 15 engineers passed out in 1960. Today it has …..seats for admitting the students in various streams. The Institute is committed to generating, disseminating, preserving knowledge and undertake research in the frontier technologies to create professionals capable to take on the world’s great challenges in diverse fields. The Institute is also having the networking with other Institutes / Organisations for sharing of knowledge and synergising the complimentary strengths in the research domain.